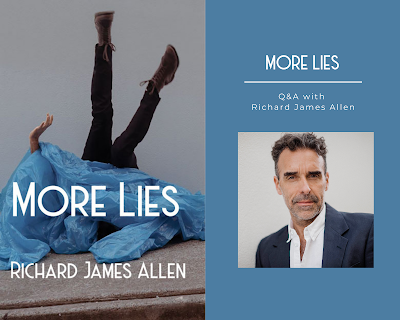 After travelling down such a long road to finally finishing More Lies, we wanted to pick Richard James Allen's brain. So we interviewed him...

Q: Give us a snapshot of your writing process

More Lies was inspired by living the life of an artist in an East Village tenement walk-up in New York City in the 1980s. Living from gig to gig, as a dancer, and having published two volumes of rather experimental poetry back home in Australia, I set out to write an income-generating page-turner in an in-your-face cocktail of pulp fiction and performance poetry that, at one point, I called 'verse noir'. I hoped it might become a cult hit, sort of a cross between Howl (by an author I had met) and The Catcher in the Rye (by an author no one had met), and so dedicated the book, in a cheekily ironic spirit, 'for Money'. I never guessed that it would have the longest road of any of my works to publication. And on that long and winding road, with no end in sight for many years, were many transformations, which I now see as hard-won blessings.

Q: You mention that you never guessed thi would have been the longest road in any of your works to publication... roughly just how lonf did More Lies take to finally come to publishing?

A: Actually, Interactive Press' publisher, Dr David Reiter, hinted at the answer to this question himself in his witty description of the 'Zoom Launch of More Lies by Richard James Allen' on YouTube: "This novel...took Richard as long as Moses wandering in the wilderness. Whether Richard reaches his Promised Land is up to you, the viewers."

Here's a link to the edited highlights video, which includes an acrobatic feat of balancing truth and lies launch speech by David Adés, and me having a go at juggling the slippery words of a slippery narrator in my mouth:

Q: What inspired you to combine thriller and comedy in the way you did?

A: While it would be impossible to trace all the roots of More Lies, one place to dig would be in Dada and the Theatre of the Absurd, accidentally planted into the soil of The Maltese Falcon and The Big Sleep.

Q: How did you come up with the storyline?

A: This book wrote itself. It literally exploded into life. My job was just to pick up the pieces.

Q: An author, a femme fatale and her brother with big ambitions, were any of the characteres based on people you know or had heard of?

A: A bit like Rosencrantz and Guildenstern Are Dead, the characters in More Lies are travelling players in a Barthesian verbal carnival; a textual, visual and aural spectacle that exists in teh shared minds of the readers and viewers of a thousand and one old books and movies.

Q: Like the protagonist in More Lies, do you find storytelling keeps you alive in more ways than as an author? (How does being an author serve you other than as a job?)

A: Creativity keeps me alive. But this book almost killed me.

Q: Is there anything you took out of this book or if you were to write it again, would you change or add anything?

A: As is traced in the 'Acknowledgements', and alluded to above, the history of the development of More Lies was a very long one. So no, no, no, no, thank you.

Q: Any advice for the reader?

A: More lies is a fast book that should be read slowly, at least the second time around.

Q: Your last book, The Short Story of You and I, is dedicated to the reader, and reviewers have commented on its warmth and inclusivity. Interestingly, More Lies uses direct addres to draw the reader into its story, not just as an observer, but as a participant. And yet the overall tone is more confrontational. Can you comment on that?

A: More Lies is syncopated and playful, a bit like bebop jazz. It asks you to engage, but puts you off your centre. It is also a little bit brazen, like a layer cake that blows up in your face. But don't take it too seriously. It's only words and feelings.

That said, now that it's finaly found  its way out into the world, amidst COVID lockdowns and an international pandemic of mendacity, More Lies almost feels like a wakeup call that is oddly relevant today.

“A wonderfully warped journey into one man’s unravelling psyche, and a joyous celebration of the necessity of story.”
- James Bradley, author of 'Ghost Species'

“Richard James Allen takes the world of Raymond Chandler - the mysterious murder, the femme fatale, the world-weary observer - and turns it on its head. We end up with a funny, provocative novel that shakes up how we think about reality.”
- Anton Enus, SBS