Poetry without a GPS


New Zealand poet Jane Simpson is attracting excellent reviews for her latest book, A world without maps. We were so delighted with them that we're including the entire reviews here from Takahe and the Poetry Society of New Zealand Newsletter. 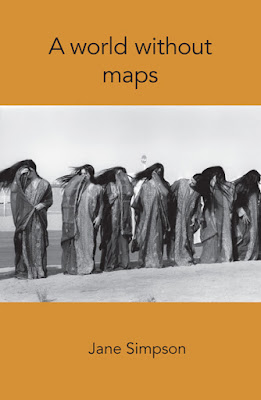 The reference subject list on the title page verso of Jane Simpson’s latest collection, A world without maps, mentions ‘Autobiographical poetry/Grief-Poetry/United Arab Emirates-Poetry’. A no-doubt efficient summation, but one that gives little hint of this publication’s scope.

In 43 poems, divided into three sections, Simpson guides the reader on several intimate yet wide-ranging journeys, first hinted at in the cover photograph of a row of young women, their long hair loose and dishevelled by a dusty wind. From an initial glance, it is a disturbing image, though it is in fact a row of young Emirati women preparing to dance the khaliji, that frenzied, hair-tossing dance of Bedouin women, when restraint and inhibition are flung aside.

The first third of this collection, Desert logic, contains poems prompted by the author’s time teaching at a girls’ school in Dubai, travelling the region bordering the Arabian Gulf. For the author, this is a journey into the unknown. Her destination unrecorded on Google Earth, she sets out, the sensation of confusion and dislocation perfectly captured in the collection’s opening poem, “A world without maps”: ‘for those who don’t read maps / no maps exist’.

That sense of confusion, of entering strange worlds and the sustained attempt to locate one’s self within them becomes a metaphor unifying, not just this section and its exploration of the strangeness of another culture, but the entire collection. In poem after poem, the author creates maps to guide her through the territory of grief following her mother’s death and the deaths of friends, as well as the fractured social and political landscape in which she finds herself living.

The second poem in Desert logic takes its start from the difficulty of speaking with a taxi driver, upon arrival in Dubai:

We keep missing
each other
Kiwi mixed with Buraimi
broken English

Again, this sets in motion a recurrent theme within the collection: the attempt to find language, not just for intercultural communication, but to define complex feelings of loss, love, and the vivid awareness of beauty in transient existence. Words open small windows that widen into moments of perception, even as a glimpse of the desert widens to an awareness of the immensity of time:

A row of girls dancing broadens similarly into realising another version of the role of women:

Girls unspring buns let tresses fall
move as hair airborne flies from side to side as if in defiance
the Principal looks on in her eagle face, aristocratic, before the dervishes

Poems set in New Zealand offer other versions of femininity. In “The Prof’s wife”, a thumbnail sketch of a kind of woman is deftly worked: ‘Her armoury was wood and steel, clanking / in tired drawers, full of crumbs.’ And here is a poem about recipes:

My grandmother lives In my kitchen cupboard
In pressed pages. Granny Irene, fresh air and her
Froebel training, raw not refined…

The work is delicate, poised, meditative, the voice that of a woman of gentle faith and social conviction. The final poem concerns the writer’s home city, Christchurch, and its loss and destruction.

How appropriate then that, as another reviewer, Bernardette Hall, has so perceptively written, A world without maps is ‘the work of a peacemaker’, one that ‘concludes with a kiss.’ 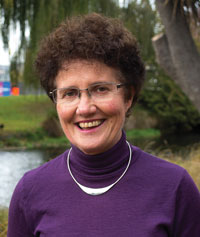 Jane Simpson has taught social history and religious studies in universities in Australia and New Zealand. Her poems have been published in journals including takahē, Poetry NZ, Meniscus and Social Alternatives, and in several anthologies. A world without maps is based on Simpson’s experience of living and working in the United Arab Emirates, teaching English to Muslim women teachers in a desert school.

A world without maps is divided into three sections: ‘Desert logic’, ‘The sky between leaves’ and ‘Like fantails in the forest’. In the collection, Jane Simpson offers a range of moments, perceptive experiences and memories, which are always felt and personal. The first section, ‘Desert logic’ features poems about her experiences overseas, which begins with the title poem, “A world without maps”, in which she searches on Google Earth for the school she is to visit:

searching for my school from the Cathedral
city on the hill, medieval Ely
with a view of the lantern,
on Google Earth
the lines
run
out

These are poems that make the reader work: they are unpunctuated, opaque in denotation, and expressing, as they do, her inner thoughts and feelings. They are nonetheless, or perhaps therefore, intriguing and exciting to read. And they do have their song.

The first stanza of “English only please”, takes the reader immediately to the scene of the desert school:

the first lesson in
the old desert
school, the national
anthem insistent
as tinnitus

Images and scenes are engaging and surprising. There is this description of the classroom in “Gentle subtraction”:

my classroom dances
to newly found vowels
in minimal pairs

The charm of this section lies in its clusters of images with their obvious connections relaying place, emotion or mood in short lines and phrases, as in “At Spinneys”, where she searches for familiar items:

find them gone, turnover
faster than stock on the shelf.

“In the Church Compound, Abu Dhabi” is a longer, more traditional poem with greater use of punctuation, as it describes the church, the mosque and the courtyard:

the Anglican church is stripped
down, anonymous as a lecture theatre.
Crossless from the street, it squats
under the landmark of the mosque.

“Passing” is also a more traditional poem, describing the place “where widows meet”. The poem ends:

“Flood-lit plains” is also a lengthier, traditional poem, where people wait for the rains to come:

Outside the oasis –
a distant music deep
in the sands – time-lapsed
roots twist, tribulus
are speckled with flowers.

The second section, ‘The sky between the leaves’ concentrates on poems about home. In the poem “Planting Lemonwoods in Tui St”, for example, we see ‘a two-bedroomed nest / of rimu and brick’ and ‘the paper road / never built’. In the poem in view of the Māori cemetery, “Purau”, Simpson takes her readers to a site that achieves her aim of revealing her native town. She sees it as ‘A place for cast-off kitchen / equipment, preserving / pans for memories …’. She juxtaposes this poem against “Family archive”, a poem about ordinary women: her grandmother, an ‘unnamed Hungarian neighbour’, Amish women, and Gisela who she describes as

… all elegance and silver,
threads beads with women friends –
the hand-painted wedding silk
ravishes us from across the bed.

In these poems, the poet is keeping track of her surroundings. For example, in “Silent lullaby”, she is a mother watching her baby sleep and reminding herself that one day he will be a man with children of his own. She writes:

When I’m old and cranky, your children on my knee,
I won’t hold back, I’ll claim my own – raucous, strong and free.

For Simpson, the family is a powerful prism, giving freedom to explore culture through intimate relationships. It is an enlightening experience to read “Last communion” (in memory of my mother, Ming) in which

Diana, in the living room
gazes across from her frame
past purples and greens, washes
on expensive paper, out
from her morphine sea.

In the final poem in this section, “Inarticulate”, the focus is once again on Simpson’s mother: this time as she is dying, the poet asks the question: ‘Why were the male nurse and I, her only daughter, / chosen, and I the one, now, speaking to you?’ Thus, Simpson enables her readers to eavesdrop on her private life and the vernacular of these poems in comparison to those in the first section of the book.

Reading the poems in the third section, ‘Like fantails in the forest’, the reader’s attention is drawn to the detail used as a metaphor for Simpson’s theme of discovering beauty in the environment. In “flower”, for instance, the poet compares the roughness of a stone to the beauty of a flower. The poem ends:

The stone is rough
in the stonemason’s hand.
Flints speckle the earth
where weeds will sprout
and flowers grow.

“Twist” is a relatively simple descriptive poem about a mermaid and a merman, but it makes interesting reading:

She wears paua
and turquoise silk, gliding as if
through water, the chamber
ultramarine, her fish-mouth
firm against the metal, gulps
his eyes on her – mermaid.

Simpson’s poem “Found at sea” is a good example of her style in this section:

Fishers cast on
in multiples of two
keep the line taut, carry it
over, then ease, slide,
purl into the back, knit one
from below.

Here is a poet with an apparently facile use of form, and often skilled at their adaptation to contemporary life. In a poem like “Tutu” images tumble in abundance and have a rightness that delights:

Tutu quivers then
blurs like fantails
in the forest, startling
from behind.

“After the earthquake” (Christchurch, 22 February 2011) is a poem in four parts and begins:

The final poem “Behind the cordon, Cashel Mall” captures perfectly the strange fascination for us of a desolate shop, destroyed by the earthquake, its scents remaining and the fact that there are

no looters
nothing worth taking
bamboo flutes played
by the wind …

There is in general an easy command of tone and register in the volume which is characteristic of Simpson’s writing. There is no sense of difficulty; the art comes across as play. The words do not strain and there is charm in both words and ideas. The poet is always in command and she is never at a loss for words to communicate her thoughts, feelings and experiences.