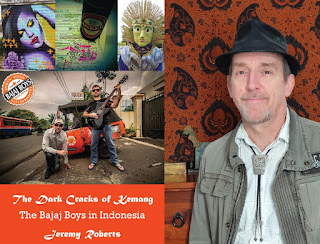 Come journey with us as we interview and discover more about Jeremy Roberts, the avid performance poet, traveller, and the author behind

Q: What was the most surprising difference you found between writing poetry and writing The Dark Cracks of Kemang, a full-fledged memoir?

A: The original intention was to construct a text halfway between prose and poetry, but I soon decided that the story – the narrative – demanded an accessible, highly readable, approach. The poems could be appended to the prose. I found that writing such a large volume of prose was, for me, just as challenging as writing poems. Just as lines in a poem go through many rewrites, so, too, did the paragraphs of Dark Cracks. I wanted to get the tone exactly right.

Q: Do you have a certain chapter/memory that was the most enjoyable for you to write and relive?

A: I’d rather say that the whole year – 2013 – was an enjoyable time to revisit, but that is avoiding the question. I suppose that this book might not exist, were it not for the formation of The Bajaj Boys, so I’ll say that recreating the gigs – the poems, music, dialogue, and camaraderie, were the most fun. I like how each of the gigs was unique and moved us a little further along the performance spectrum. I’ll also say that writing the guide to the Indonesian dating scene was highly enjoyable.

Q: What advice would you give future expats who are travelling to Indonesia that you wish someone had told you?

A: OPEN your mind, relax, and float downstream. Try to learn Bahasa Indonesia, too.

Q: Any prospects for The Bajaj Boys to come together for a live concert for New Zealand or Australian audiences?

A: A live concert? It’s only a plane ticket away! Would it be a free gig? Derek might want a Scotch; I’ll take a zero beer. A couple of slices of cheesecake or banana splits (see book) would probably seal the deal.

Q: If you could add an opening soundtrack to your book, what song would you pick?

A: 'Strange Days' by The Doors.

Q: As poetry is a big factor in this book, what in particular draws you to the art and what poem in The Dark Cracks of Kemang do you wish more people knew about?

A: Writing poems is the best form of creative self-expression I know – or can do. Even though I am quite public about my commitment to poetry, it still feels like I belong to a secret society. (The number of people who actively engage with this ancient art is, by my estimation, 1-in-1000 in some locations and 1-in-5000 people in other locations.) The idea of a muse – an inspirational goddess, as defined by the Greeks, is addictive, and she sometimes delivers! I like spending time with pen and paper to find out how you exactly feel about something or somebody. The challenge – in the 2020s – is to be free and write about what you really want to, in a way that you really want to – and not be trumped or corralled by contemporary ideology or social values. Reading poems by others remains a pleasure and this also motivates me. Live poetry readings – in which I am heavily involved – is now possibly more important than printed-on-the-page poetry, which is a remarkable turn-around. I want to make more musical recordings of my poems (including as The Bajaj Boys), which also pushes me forward. And of course, I’d like to publish more poems.

Q: Is there a poem from Dark Cracks that I would love more people to know about?

A: All of ‘em! – is the poet’s honest answer. But since you asked, I will say the five-part Bali poem. It’s a circular, micro philosophical novel!

Posted by IP (Interactive Publications Pty Ltd) at 18:04 No comments: