Email ThisBlogThis!Share to TwitterShare to FacebookShare to Pinterest
Writing in Elsewhere, Graham Reid is impressed with Jeremy Roberts' Cards on the Table, despite the fact that Jeremy lacks the profile of Big Name New Zealand poets...

While musicians bemoan the fall-off in sales, for decades poets have had to accept that selling 200 copies of a collection is actually a pretty good result. Most have to do with considerably less than half of that, unless they have a very big extended family.

And in the poetic landscape there are the Big Names whose work can be acclaimed but largely unread (the late Kendrick Smithyman comes to mind) or are admired but often the reader can be made to feel unworthy for not actually “getting it” (Bill Manhire).

There have always been the volume dealers (Sam Hunt, James K Baxter) whose lives, personae and approachable work means they can shift the units and every now and again get their compilation out for Christmas.

Poets have been "indie" for decades in that because major publishers don't see a dollar in poetry collections other than by Big Names or those with some cachet (Brian Turner, Hone Tuwhare), they are obliged to produce their own work. It's called vanity publishing in the book trade, and for the most part it is ignored by mainstream media (which actually ignores most poetry anyway).

Spare a thought then for expat Jeremy Roberts who is part of this broad spectrum but doesn't even have the advantage of being around to have a profile.

He is currently teaching in Jakarta where this large paperback – about 70 poems at a guess – had its launch.

Roberts – an Auckland uni graduate way back whose subsequent career seems to have involved doing most things (oyster farmer to picture framer) and time spent in Australia, Canada, the USA, Britain and Europe – has been influenced by the soundtrack of his times: soul, classic rock, punk and beyond.

And it seems in Jakarta he has formed a couple of bands with local musicians.

So he has a lot to write about, from reflecting on films like Surf Nazis Must Die or Warren Zevon's fatalistic acceptance of death in the song My Ride's Here to a Zen-like detachment or quiet, pared-down observations.

He picks up stones and shells from the beach of life, looks at them careful, turning them in his gaze, then places them back . . . but never in exactly the same position.

In 'Whimsical Vegetables' where he contemplates a city of traffic and psychic energy he says,

“the moving parts of life swirl in yellow oil/thru car windscreens/& shopping lists ricochet inside skulls of/thought/there's hope in that feeling of sun on the steering wheel . . . turning warmly through choices . . .”

“the cassette tapes I play as I drive around the city/in my1984 Toyota Corolla LE/are a dead man's tapes . . .”

He is in a Spanish railway station, an Irish bar in Takapuna, on a balcony in Indonesia (“sipping vodka with Trotsky in old Batavia”) and on the road to somewhere else.

Hank Williams, the second side of Abbey Road, Marvin Gaye and Ian Curtis and the Pet Shop Boys all appear in Cafe List . . .

Pop culture as much as philosophy is here, sometimes in deliberately jarring collision or simply coexisting in harmony.

'Rainy Season Poem' pulls all those threads and ideas together in monsoon season where the Adagio in G Minor plays in a Starbucks while outside are frogs, rats and monkeys . . .

it was an old year falling.& I kissed the residue& waited.

Gemma White's poetry collection Furniture is Disappearing was released in 2014, but here's a thoughtful review by Roxanne Bodsworth that will hopeful renew interest in it: 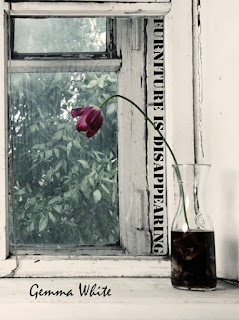 When living with the threat that the tactile experience of reading may be subsumed by the digital era, this book recalls the sensual experience. It feels good to hold, like handling suede or ancient vellum, and the image of the wine-dark tulip against the window looking onto an overgrown garden invites the reader in. The poems are equally as sensual; looking through the window into the poet’s experience of sex, adventure, longing, relationships that begin, end, and where the “furniture is disappearing” as lives are packed up and removed. White, in sharing her experience with such beautiful poetry, engages the reader in the experience of her life.The first poem in any collection, like the opening paragraph in a novel, is the most important for capturing the interest and enticing you to read on. ‘Guru’ does this:

Like the people on the street, we’re prepared to follow White’s directions into the rest of the book, and her engaging personality comes through each one. That personality is nice, likeable, open and trusting, with a child-like sense of play, playing with language and images. Which all can make you very angry, upset for her, when she comes up against the inevitable bastards like in ‘Crimson Encounter’. Sex that isn’t what it should be, instead is meaningless and messy, and non-consensual, leaving her debased, devalued. Paradoxically, White’s strongest poems are the ones that leave behind that child-like state and engage with the darker aspects of life.

And there is nothing child-like about her skill with language and imagery. These poems are the result of careful and disciplined honing of her craft, evident in ‘Love Poem for London’, arranged in rhyming couplets but with the rhyme in the assonance, giving it a soft, rounded sound that matches the emotion and the aesthetic of the memory. And the excellent pantoum of ‘Ardent Lovemaking’ where she also plays with a juxtaposition of the phrases that works to avoid the monotony of repetition while strengthening the connection between the quatrains. The erratic rather than regular rhythm adds to the topical chaos. Some attempts haven’t worked quite so well. ‘Father’s Breath’ is another pantoum but it feels contrived and awkward. And ‘Sonnet for my Lover’ is cloying in its romanticism, though breaking away from the metrical requirements does effectively move it into contemporary modernism. Others such as ‘Friendship’ are just snapshots of her life, encounters, relationships, friendships. There’s a lot of sex, drinking, and drifting, and it does start to feel a bit voyeuristic in the reading.


I don’t know what this friendshipIs based on, maybe justThe drinking of SmirnoffInto the early hoursAnd the promiseOf your skin.

But there are few enough collections where the poet hits the mark with every offering and here there are enough very good poems to make it worthwhile reading.
One of my favourites is ‘Where I grew up’ that begins:


The trees had their wings clipped,lumbering amputees with leaves.

Her poem, ‘Mum’ about a mother’s degeneration into senility is aesthetically simple, pared back, but fear-filled and poignant:

The closing of a collection, for it be a satisfying experience holistically, is as important as the opening and White achieves this with ‘Furniture is disappearing’. With the furniture goes her optimism and this collection has been a rite of passage into adulthood. Despite the disappointment expressed in the last poem, readers can confidently, and optimistically, expect more poetry from White in the future that will reflect an increasing depth, maturity, and mastery of the craft.

We're delighted to share this review by Susan Constable of Deep in the Valley of Tea Bowls by Kathy Kituai and Fergus Stewart, which appears in the latest issue of Expositions. 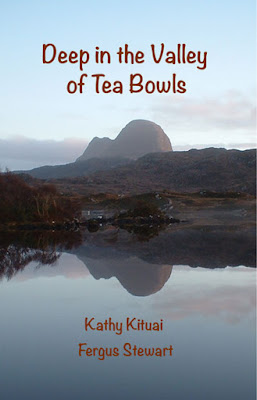 In this collaboration, the Australian poet, Kathy Kituai, travels to Scotland to spend three months interacting with the potter, Fergus Stewart, who produces beautiful art through the use of his hands and creative eye. While appreciating the time and patience he exhibits with his craft, Kituai displays her own artistic talent by using images and words to express what she sees and feels.

In the introduction, Kituai notes that “although poets use less physical energy they can be weary at the end of a day’s writing. Fergus and I came to the conclusion that the main difference between pottery and poetry, was only an extra ‘t’ in pottery.”

Perhaps that’s true, for it seems there are many similarities between these two artists, including knowledge and skill for their chosen art form, as well as prolonged concentration, patience, and a willingness to experiment and takes risks with their pots or poems. Just as potters take handfuls of wet clay and mould it into vases, bowls, cups, and pots for us to use in our daily lives, poets use words and images to mould their thoughts and ideas, enriching the world in which we live. Stewart shows us his work through colourful photos, Kituai reaches us through the printed word, and there’s a lovely balance between the two throughout this collection.

for all their talk
on poetry and pots
the wheel spins …

look at what might be said
simply without words


For the reader, Deep in the Valley of Tea Bowls is like arriving at an intersection where a visual art meets a verbal one. Such a lovely place to stop, sit for a while, and simply enjoy what’s going on when cups, bowls, and pots seem to live lives of their own.

they linger
in the corner of the kiln
tea bowls
glazed in deeper hues,
smoke the colour of sorrow

There’s a musicality to these poems and a smooth flow of words that seems to match the rhythm of the potter’s wheel. Many of the tanka sound effortless, which is surely not the case, but rather the result of a great deal of practise and considerable talent on the part of the poet. It takes time and attention to get the wording, the line breaks, and the use of sounds ‘just right.’ Consider the following tanka with its alliteration of 3 hard C’s and 4 W’s, the consonance of P’s in line 1 and the assonance of long A’s in line 5. And then there’s the sound of the

wind itself.
teapot and cup
her only companions
close by
the wind wailing
with loose window frames

Also in the introduction are these words from the poet:

“… the daily task of working with clay, be it plugging, glazing or trimming pots are much the same as writing zero drafts in a journal and moulding them, first to last draft, into poetry ready for publication.”
Her tanka go well beyond description. They leave the reader with dreaming room – a space to evoke our emotions and an invitation to ‘finish the poem’ which she’s begun.

to which
would Buddha bow …
this bowl
fitting the palm of her hand
or those the potter discarded?

every night
she raises to her mouth
his tea bowl
whose idea was it
to glaze it with the moon?

Deep in the Valley of Tea Bowls is a welcome addition to my tanka library. Nicely laid out with usually only one or two tanka per page, the book is broken into numerous sections, including ‘pots and poetry’, ‘a mantra of pots’, ‘no other spice’, and ‘set with a linen cloth’. The many pictures, by various photographers, add a wonderful splash of colour, while providing a good look at the potter’s workplace and finished products. The tanka, including the title poem, stand well on their own and speak for themselves.


Oh! to rest
deep in the valley
of tea bowls
the clay … the kiln
and craftsmanship

Kituai says, “I embarked on this journey wondering if I could take a handful of words, five lines, no more than that, and like potters, set out to create vessels in which to offer up food for thought.” Considering the consistency in the quality of her writing, the poignancy of many of her tanka, and her ability to convert imagery into words, her success is readily apparent.