The Timelord lands in Perth!

We're pleased to report that David Reiter (also known as the Doctor) has had his latest work, Timelord Dreaming, shortlisted for the 2016 Western Australia Premier's Award!

This is the third time David has been nominated for this coveted award. Nullarbor Song Cycle, a short film that documented his road trip across the iconic semi-arid landscape, was shortlisted in 2011. My Planets Reunion Memoir, the interactive website and film completed while he was residence at the Banff Centre for the Arts, won the award in 2012. 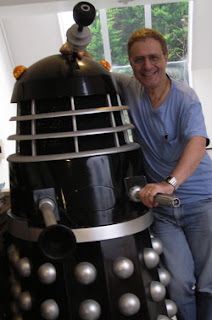 P.S. Cottier, reviewing for the Sydney Morning Herald, says of the work: "In reusing motifs from popular culture, particularly that of science fiction, the poet ties deeply personal experiences to those we share through the web and other created worlds."

Leah Kaminsky, author of We're All Going to Die and Deputy Edior of the Medical Journal of Australia, says: "Illness as altered reality isolates us from the world. Sharp as a scalpel, David Reiter beams trippy tweetems from his hospital bed, cracking sterile walls and piercing us with poignancy."

And Anna Maguire, of Digireado, commented that "In the half-life world of hospitals, pain and medication, Dr Reiter has taken us on his journey into and through his mind. Taking twists, turns and delightful detours, he has developed a new form of digital communication – tweetems. While some draw on visitations of Doctor Who, the tweetems also take us on a myriad of musical and educational voyages. Between sonic screwdrivers and white cell scouts, Timelord Dreaming ensures our normalacy bias will be prodded and deconstructed." 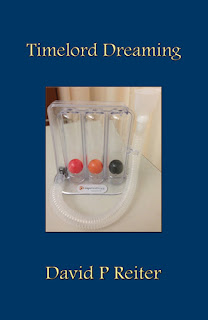 At first glance, Timelord, in its print edition, seems more conventional than David's previous work. Each page has a dedicated three line text that he describes as a "tweetem" – a hybrid form that is influenced by Japanese poetic forms and limited by the 140 character max of the tweet.

But then there are "internet call-outs" that invite the viewer to link to external websites, with a surprise at every click. Sometimes the links are to sites about medical issues, or to musical clips and videos associated with the theme of the tweetem. And of course, there are the links to aspects of the latest Dr Who series.

The book was an outcome of David two week stay at the Mater Hospital during which he was recovering from an emergency gallbladder operation, and where he met an orderly lookalike of the latest Dr Who, Peter Capaldi, who watched over him during the Emergency Ward and carted him off for the CT scan that finally diagnosed the gallbladder problem.

The tweetem form occurred to David as a means of capturing the fragmentary nature of the hospital experience from the patient's point of view, where the mind and imagination drift in and out of focus, bringing together a variety of images, sounds and insights, as well as a reflection on the patient's loss of control and even identity as the hospital stay continues.

While Timelord is of course available in a print edition, we recommend the digital version for those who want the full immersive experience of being able to immediate link to the external sites.

Since you're online now, why not check out a preview here?
Posted by IP (Interactive Publications Pty Ltd) at 18:33 No comments: