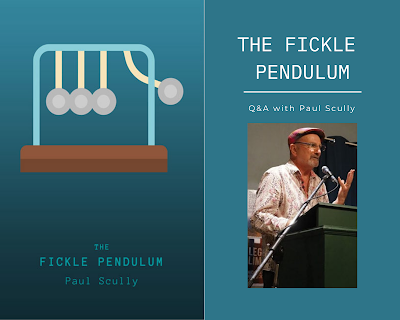 With so many views on belief and doubt, we interviewed Paul Scully to get a better insight on navigating the philosophical discussions, as explored in his poems in The Fickle Pendulum.

Q: What motivated you to explore belief and doubt, and the way we view them?

A: I attempted to Australianise The Conference of the Birds in my previous book, Sature Lines, and investigated how the Sufis used poetry to explore their beliefs. I'd read bits of Rumi and Hafiz before but not widely. During my process, I wondered about the converse known as doubt, and it grew from there. I also recalled Graham Greene, his fallen believers and moral ambiguities. A Catholic upbringing must have also been in the mix somewhere!

Q:  What do you hope is the biggest take away amongst readers of The Fickle Pendulum?

A: I try to be neither didactic nor dogmatic. I take heed of the say, don't tell maxim. There were elements of personal investigation, interest in the stories found, some education, wonderment, etc.. I'd be happy for people to catch a sense of these and perhaps be interested, if not equally, then somewhat, and to appreciate the writing at some level.

Q: Did writing The Fickle Pendulum change your views on belief and doubt?

A: Not Really. The biggest surprise was finding out someone like Laura (Riding) Jackson could walk away from poetry. This discovery drove me to reading up on why she did so. My findings were that her flinty personality radiated absolutism and her poetry suggests a difficulty in maintaining such intensity over a prolonged period, but it is still a surpsise to me. We've all had times when we've felt our writing has become insipid or perfunctory, but her reaction is way beyond that. Although my writing process didn't change my views on belief and doubt, it has caused me to think about what I love about poetry, and to challenge my premises.

Q: Why did you choose to review the beliefs and doubts specifically through St Thomas the Apostle, Galileo Galilei and Laura (Riding) Jackson?

A: The challenge is to ground the discussion of abstractions in some way and I wanted to take multiple perspectives. I've used historical characters in the past and it seemed natural to do so here. They bring a storyline with them which can act as scaffolding while you work at the detail. St Thomas, known as the Doubting Thomas due to his lack of faith, suggested himself. Science is in some ways a counterpoint to religion and I just needed to find the right scientist. Galileo Galilei was a Catholic who on one hand believed in God and religion, but on the other hand, was torn by his beliefs in the role of science. I had doubt in poetry in mind from early on as perhaps a tangential take on the theme. Someone had suggested the work of Laura (Riding) Jackson to me alongside Rimbaud, who was another candidate.

Q: Do you often find yourself in doubt and how do you prevent or overcome doubt?

A: I wouldn't say I face doubt often but I certainly entertain doubt as more than a momentary feeling from time to time. Climate Change has been a persistent source in recent years, especially when people espouse views that it is nonsense or that we shouldn't take restorative actions for nationally competitive reasons. I find it incredibly hard to understand how intelligent people could arrive at such conclusions and wonder at humanity. Likewise truly evil acts. People offer both despair in such instances, but they also offer salvation through love and friendship. As in many things, it is necessary to accept paradox as a natural and recurrent phenomenon. It also helps to bring things down to an everyday scale and find meaning and pleasure there.

"If there are no easy answers here, there is nevertheless a sense, as Browning says, that ' All our life is some form of religion.' In verse that is measured and always thoughtful, Sculy weighs the detail and delight of things against their difficult, confronting implications."
- Martin Langford, author of Groud

Click here to get your copy of The Fickle Pendulum