We were very pleased to see this review of Aquamorphia in the Greek review Poeticanet. 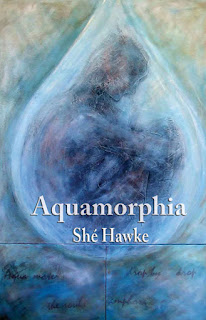 Shé Hawke’s three-part collection Aquamorphia: falling for water achieves a metaphysics of fluidity borne out of feminine desire first conceived by the French feminist Luce Irigaray. The collection surges and floods previously unoccupied spaces; water, a material discourse, narrates the world and creates a “polymorphous” text no longer constrained by the rigid categorization of phallocentric structures. Undoubtedly a poetics of meta-language that is unafraid to confront its own materiality, it both performs a revisionist creationism that credits the “Aquamater” as “Creatrix of All” and celebrates water as the most primordial divine force.
From its beginning, the collection invites us to “To re-member our moist beginnings,” in a re-ordering of the phallocentric structuration of ancient myth. In order to deconstruct the phallocentric origins of mythology, it brands Zeus a “matricidal plagiarist” and upholds Metis instead as mother of Athena. Replete with apostastic syncretism (for example, the christening of the Erikapaios-Phanes-Metis triad as “mother/daughter/holy spirit”), Hawke’s collection provides the needed feminine alternative to the androcentric syncretistic mixing of Christian and Greek mythology found in the work of poets like C.P. Cavafy and Angelos Sikelianos.

Aquamorphia’s homage to feminists Irigaray,  Hélène Cixous, and Julia Kristeva, naming them “Guardians of the maternal divine muopoiesis,” concomitantly flattens attention to such male authorities as Zeus, Nietzche, and Freud, all dismissed as suffering under “hydrophobic” logic. The collection’s feminization of water, often through an association with breast milk or amniotic fluids, demarcates the strictly female realm of thought no phallocentric assumptions can breach. Thus, by a self-referential awareness, the work actively addresses its own re-gendering of myth and constructing of feminine space by the marked wordplay of doubly charged terms like “Sexting The Waters,” “trans-parent,” and “re-member.” Its stanzas, replete with examples of linguistic deconstruction and reinvention, push language to its limits and thus also undergo a kind of de-phallicization.

In many ways, the collection reads as a philosophical re-envisioning of Neo-Platonic transcendence that argues all entities are connected to an archetypal, transcendent “One,” a force with which they seek reunification. Then, analogously, in its revisionist mode, Aquamorphia argues that all organisms, regardless of size or cognizance, owe their conception to “Water,” here the equivalent of the Neo-Platonic “One,” and also desire reunification. Perhaps we might understand this claim as a feminized rewriting of another poem invested with notions of Neo-Platonic transcendence, that of Odysseus Elytis’ famous refrain from the Axion Esti, “ΑΥΤΟΣ ο κοσμος ο μικρος, ο μεγας!” (“THIS the world the small the great!”). But Hawkes’s feminist, re-directed lines read, “All creatures desire reunion/with the first pool of their advance/the safety of internal amniosis.” Thus, the psychoanalytical notion of “an affectional bond,” a term coined by psychologists John Bowlby and Mary Ainsworth to capture the craving to return in Aquamorphia’s words to the “gestational womb,” beautifully intermixes with Neo-Platonic philosophy to uphold the collection’s aquacentric reading of the world.

Because of its highly cross-disciplinary nature, Hawke’s collection promotes an eco-poetics dedicated to acknowledging the importance of water to all forms of life. The oppression of phallocentrism, inextricably tied to the exploitation of consumerism and the destruction of eco-systems, marks Aquamorphia’s two-pronged attack as a revolutionary work of ecofeminism.  Reverence for a maternal divinity and respect for a feminized, natural world are not as incompatible as they might have appeared in previous patrocentric categories. The phonetically distinctive resonances of the Greek language, heard in both the invoked mythological names and the poeticized biological terminology, attempt to unify the disparity between myth and science, proposing in place a new mythology infused with scientific conceptions.

Once the rigid boundaries of phallocentric structuration have been removed, this metaphysics of feminine fluidity, then, celebrates the interrelationships among philosophy, psychology, mythology, biology, and ecology. Unification is the core of this remarkable collection, “We are one/In your wet,” which partly is why it so successfully houses such a disparate array of paratextual quotation, from the ancient Greek philosopher Heraclitus to the twentieth-century ecologist Rachel Carson. Through its lapping borders and fluid transitions, its eclectic references and theoretical foci, Aquamorphia builds new feminist platforms to resurrect the forgotten feminine figure of Metis as the movement’s crusader.
Shé Hawke is an Australian cross- disciplinary scholar and award winning poet from the Department of Gender & Cultural Studies at the University of Sydney. Her research focus is the cross-cultural, myth/eological and environmental values of water. Her book Aquamorphia: Falling for Water (IP, 2014) was nominated for the prestigious Miles Franklin Award. It is a poetic representation of her doctoral thesis: Aquamater: A Genealogy of the Impossible (2008) that rediscovers Greek Water Deity - Metis, and traces water through deep time and disciplinary fields.
Ilana Freedman is a PhD candidate in the Department of Comparative Literature at Harvard University. She received her Master’s in Comparative Literature from King’s College London in 2014. Her research interests include Modern Greek poetry, the Greek diaspora, Classical Reception Studies, and Adaptation Studies. She is the graduate coordinator of the Ludics Seminar of the Harvard Mahindra Humanities Center and of the Advanced Training in Greek Poetry Translation and Performance Workshop.
Posted by IP (Interactive Publications Pty Ltd) at 16:06