Why did Jenny McFadden pass up a book talk with Richard Flanagan?

Blogger's Note: This is Jenny's launch speech for The Copyart Murders

It’s a pleasure to be here to introduce a new novel by Geoffrey Gates – The CopyArt Murders.  Of course I did have tickets for another book event this evening –as we speak Richard Flanagan is conducting a book-talk with Jennifer Byrne at the Town Hall on his Booker Award winning novel The Narrow Road to the Deep North.  Understandably, I ditched this big-ticket gala once I was made aware of the opportunity to speak on behalf of Geoffrey Gates. 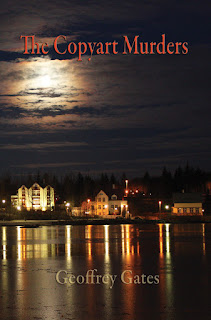 The Copyart Murders is a work of Crime Fiction. And I’m sure Geoff would be pleased to hear me say this, it’s a work of “intellectual” Crime Fiction. As most readers know, Crime Fiction has enjoyed a massively extended period of readership popularity. Possibly this is because we are all, by nature, nosey busybodies who like the opportunity to peek into the private, illicit doings of seemingly upstanding people. And certainly it’s also because, given the state of existential uncertainty in which we all live in the modern era, we all crave the sense of closure and certainty that the average Crime Fiction novel affords us. Even if we don’t know what the hell is going on in our own lives, it’s nice to read about an orderly, if blood-soaked world, where hidden actions can be deduced from small amounts of evidence and perpetrators can satisfactorily be brought to justice. It gives us some sense of stability and safety to think that there are still noble searchers-out of truth somewhere in the world – the Poirots, the Miss Marples, and all the rest who will stop at nothing to set an uncertain and often dangerous world to rights. And you only have to look at any random television program to know that, after concocted ‘reality’ cooking and building shows, crime rules the remote control.

However, how can the often ill-regarded, stock-standard, pulp-fiction elements of Crime Fiction find a place in the more intellectual realms of modern literary fiction? If you’re ever suffering from some serious disease which requires a long period of bed-rest you could try reading Foccault, or Derrida or Roland Barthes, in an effort to understand post-modernism before you die. And then you’ll die anyway. Yet the playfulness of postmodernism, so often alluded to in theory, does exist in practice. So, purchase a copy of Geoff’s novel before you hit the groaning shelves of post-modernist theory.

To clarify from the outset, within the novel written by Geoffrey Gates lies a novel written by his hapless and sometimes truth-challenged Australian protagonist, Blake Knox.  Geoff’s novel concerns, and I quote, “A would-be novelist found unconscious on the grave of an artist who very much resembles the victim in the novel he had come to France to attempt to write.” Thus, the novelistic endeavours attempted by the would-be author within the novel, Blake Knox, prove to be somewhat fraught since the at-the-time “fictional” death that he writes about predates by 23 days the death of the very artist who is the victim depicted in Blake’s crime fiction novel. Detective Sauveur who is investigating this murder of the artist immediately presumes it to have been committed by the would-be novelist Blake Knox himself. Sauveur, with a considerable degree of cynical self-reflexivity points out, that this is ‘a most unfortunate case of foreshadowing.’ Blake Knox himself notes ruefully that ‘stumbling upon the plot of an actual crime was an occupational hazard of writing he had never considered before.’

To boot, the death imagined and then written about before the occurrence of the matching “real” death upon which the novel-outside the-novel turns, is a very postmodern death. It is a death seemingly brought about by the very material that so plagues the royalty-dependent modern novelist of the real world – death by photocopy. 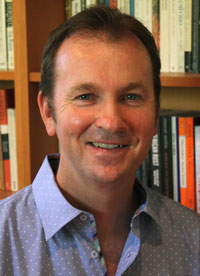 Indeed, the novel concerns itself to a considerable degree with the problem of re-presentation. In discussing one of the artworks of the murdered artist Jean Genet, the narrator, the sometimes fumbling but nevertheless intelligent Blake Knox, notes that Eyes (2003) was a landscape painting with a camera lying in the grass in the foreground, and Mount Ventoux in the background. There was an immediate tension over subject, whether it was the work being painted or the representation of that work in the camera lens where a reflection of the mountain and sky had been carefully matched. This pretty much sums up the problem at the heart of the novel. What is “art” and what is merely reproduction? And, more to the point, how can the detective work performed by the fictional detective/detectives be separated from the detective work done by the novelist/novelists in the creation of the very novel in which the detectives and novelists are represented? It’s all a puzzle – but then so is the world.

The Copyart Murders is also a demonstration that, outside the kind of single-minded pulp fiction, which brooks no deviation from formula, there is no such thing as the single-genre novel. Sprinkled liberally throughout this work of crime fiction is an entertaining mix of travelogue, laconic Australian humour and French for Beginners (not to mention sex, lies and videotape.) For instance: ‘…it was a short walk to the village’s main attraction, the Notre Dame de Cadenet. Legend has it that a former farmer was ploughing his field here in the 12th century when his cows suddenly knelt down in front of a row of century old junipers (“Cade” in French) and the farmer decided to build a chapel here in response to this minor miracle. (But perhaps his cows merely had dodgy knees.)’ And elsewhere;  ‘Whatever evidence the French police had against him, it was a matter of common sense that a lanky intellectual like Blake would hardly be the type to commit a murder for the hell of it. For what possible motive could he have? A deep hurt in response to the painter’s manner to him during their dinner together? A pathological hatred of landscape paintings?’ You get the drift. The novel will engage your intellectual faculties, but it will also entertain you.

The novel begins with a memorable statement from Italo Calvino; “Who is each one of us, if not a combination of experiences, information, books we have read, things imagined.” And indeed when the renowned novelist Geoffrey Gates is remembered and lauded in biography, perhaps his own description of his young, inexperienced but very readable and entertaining writer-protagonist Blake Knox, on his journey from Innocence to Experience, will preface those memories: ‘a teacher and (very occasional) writer whose only earthly possessions were his acoustic guitar a mustard-coloured sleeping bag, and an ever-expanding collection of paperbacks.’ Given his parlous state Blake concludes ‘I’ll write a book… because everybody likes an author!’

The Copyart Murders is a memorably entertaining and engaging novel on many, many levels. I recommend it to you most highly.