It's not often that poetry gets reviewed in the major newspapers any more, so we were very pleased to see The Sydney Morning Herald's review of our recent anthology of speculative poetry, not to mention their characterisation of IP as 'risk taking', which reminds us of Sir Humphrey's notion of what it means to be a 'courageous' politician in Yes, Prime Minister.

Peter's review speaks for itself, and we hope it'll prompt you to buy the book to reward our risk-taking, if you haven't already done so, and also to share the news.


One of the most enterprising, unusual and rewarding anthologies of the last year is The Stars Like Sand: Australian Speculative Poetry, edited by New Zealand writer Tim Jones and Australian poet PS (Penelope) Cottier. The key word in the sub-title is defined with an appropriate generality: "the speculative is the area in which we attempt to write what we can't possibly know". 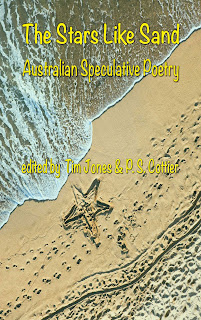 The poets included range from the 19th century to the present, a much narrower temporal span than their poems, which travel millennia into the future and across galaxies. Bearing the latter point in mind, the editors note that theirs is a book "with a wide geography and an interesting fauna". They continue: "Here be dragons, true, but also zombies (traditional and vegetarian), werewolves, swagmen, poets small enough to fit into pockets, aliens of various sorts, angels, people made mostly of spare parts, or preserved wholly in DNA, and intergalactic tradies."

The collection opens with the controlled whimsy of "Tea and Stars" by the always engaging John Jenkins: "The mouse travelled to the stars/in a blue teacup". John Dolce's "Job for a Hyperdrive Mechanic" works with a wry matter-of-factness: "As I recall the ambient temperature/of the angular discharge tub/airlocked the anode rod". David Adès' travel to "The Three Moons of Tenoa" ends plangently: "how unimaginable a world/with placid seas, and no capacious moons/to sing serenades by". Travel is also the affair of S.K. Kelen's brilliant parody of a tourist brochure in "Flying Toasters". This of Kursa in Beta Eridani: "booking accommodation well in advance is wise though entirely futile". This first section also contains "The Last Planet Out" by David Reiter, who is also the publisher of the admirable risk-taking Interactive Press that we can thank for this book.

In this splendid anthology, that entertains from start to finish, we find such colonial poets as J. Brunton Stephens in "The Courtship of the Future" (AD 2876) depicts a world where – even though people coupling have been "taught to draw the whole soul though/A foot of gutta-percha tubing"– sexual misconduct has not been eradicated. Tim Sinclair's vision of the future in "Silent City" is quietly mournful: "There is no sunrise or sunset in the city,/just a uniform, sourceless glow". In "The End of the World", Lawson's contemporary Victor Daley reveals a peevish and disappointed God who brushes Man off his knees: "With all its glories ripe/The Earth passed, like a spark/Blown from a sailor's pipe/Into the hollow dark". The Stars Like Sand shows us, in the work of the more than 80 poets included, much of that illimitable dark, as well as the flights of fancy and hope that can give brief and brilliant illumination. Seek out this book – admirable, and one of a kind.