What do President Obama and Madonna Have To Do with Project Earth-mend?

What do President Obama and Madonna Have To Do with Project Earth-mend?

Margaret Warner of Buzzwords had this to say in praise of Tiger Takes the Big Apple:


Tiger Takes the Big Apple is the fourth book in the Project Earth-mend Series by David Reiter. Once again the adventurous Crew consisting of native Australian animals (the blue-tongue lizard and the crow) and introduced species (the cat and camel) team up with Tark the shape-shifting extra terrestrial in the form of a frog, to combat The Great Danger threatening planet Earth.

Mick, the robot Commander of the Abell 2218 starship fleet and the robot crews are planning to destroy the Earth or at least the humans on it. Their reason is that humans have plundered Earth’s resources choosing wealth and waste over the health of the planet and in the process have caused widespread pollution of the air and water and are also guilty of ignoring climate change. They do not want the planet Earth to influence other planets so their mission is to destroy the humans.

Tark and his Crew set off in their Teleportation Module for the Big Apple (New York) stopping at various destinations along the way. They encounter different species of creatures who live in varying habitats aiming to enlist them to sign up to Project Earth-mend. Not surprisingly they hear that the future of all of the different species they meet (the timber wolves, the bats, beavers, eagles, racoons and rats plus others) is already compromised as a consequence of the humans’ thoughtless plundering of the Earth’s resources and it seems that Mick has already contacted them hoping to gain their support. 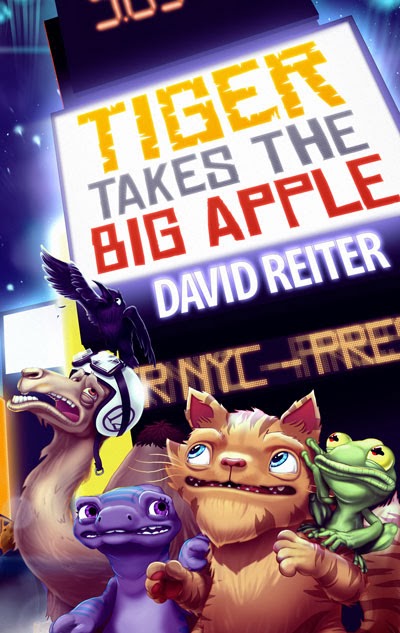 Just when the future of planet Earth look lost, Tark and his Crew manage to persuade President Obama and Madonna to address the United Nations Security Council in New York to convince them to pledge that all countries will work together to combat global warming and work towards a sustainable future.

Tiger Takes the Big Apple deals with important environmental issues but its quirky characters, fast-paced action, laugh out loud humour and sci-fi technology ensure that it is always first and foremost a great read suitable for ages 8 to 12.

Tiger Takes the Big Apple is available for pre-order from IP Sales and our usual distributors, with release date of 1 February. Special bundle prices for the Series are available upon request.
Posted by IP (Interactive Publications Pty Ltd) at 18:49