Review of Bringing Down the Wall 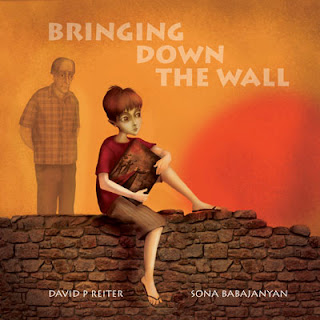 Just in, a terrific review of Bringing Down the Wall, sent in by Barbara Braxton...

Once, Joshua was very close to his grandfather but since his grandmother got really sick and died, he hasn’t seen him because his mother will not let him.  Joshua suspects it has something to do with his grandfather’s new wife, but eventually the tug of family overcomes him and he sets out on his own to visit him secretly. Timidly he approaches the house and knocks, and is greeted by Riva who tries to persuade him to ring his mum while they wait for Grandpa to come home with ice cream.  But Josh wants to see his grandpa first and when he arrives, they sit down and Grandpa tells him a story from his childhood about little boys not being able to make a difference.

But Joshua disagrees – he thinks they can and he thinks he is.

That’s not the only lesson Joshua learns that day in a sensitive portrayal of a situation of a family’s rift that is all too common.  For not only does Joshua learn that just one person can take the step to healing, he also has his grandfather’s wisdom of knowing why the rift has occurred and there is understanding rather than blame. Sometimes time can heal, but sometimes it can create a gap too wide to cross. His may not be the only heart healed today.

The soft muted tones that Sona Babajanyan has used in the illustrations echo the poignancy of this story that explores topics that are common in our students’ lives but not necessarily written about in books. The ache between grandchild and grandparent and vice versa is tangible, and there’s always a piece of you missing when one is removed through divorce or death.  Too many years can be lost if there is no reconciliation and Joshua may prove inspirational to some. This is fiction mirroring real life. Sometimes all it takes is the courage to pick up the phone. Little people CAN make a difference, indeed.